In December 2017, Huntington’s disease made global headlines for a great reason: scientists had made a breakthrough in the hunt for a treatment. The drug, called Ionis-HTT Rx, is hoped  to lower the amount of huntingtin protein in a person with HD which may slow down, stop or even reverse some of the symptoms of HD.

Ionis-HTT Rx was tested for safety on 40 volunteers over a 27-month period. The trial results were published in a media release on December 11, 2017, with two important announcements:

What researchers do not yet know is whether or not this reduction through IONIS-HTT Rx treatment will have any effect on people’s symptoms. There is hope that by ‘silencing’ the protein, symptoms may be reduced, stopped or even reversed, but this is not yet known. The next phase of the trial, hopefully starting late in 2018, will investigate this.

Here we are compiling many of the key news stories and articles about the drug IONIS-HTT Rx.

HDBuzz: "Success! ASO drug reduces levels of mutant protein in Huntington's disease patients"
In an announcement likely to stand as one of the biggest breakthroughs in Huntington’s disease since the discovery of the HD gene in 1993, Ionis and Roche today announced that the first human trial of a huntingtin-lowering drug, IONIS-HTTRx, demonstrates that it reduces mutant huntingtin in the nervous system, and is safe and well-tolerated.

HDBuzz: "Ask the expert: Q&A on the huntingtin-lowering trial program"
The research news, announced on 11 December 2017, that a research team from the Huntington’s Disease Centre at University College London have made significant step towards a possible treatment for Huntington’s disease, raised many questions for the Huntington’s disease community. Dr Ed Wild answered some of these questions on behalf of the UK HD Association, helping to give some context to what this news means for people affected by Huntington’s now and in the future.

The Guardian: "Excitement as trial shows Huntington's drug could slow progress of disease"
A landmark trial for Huntington’s disease has announced positive results, suggesting that an experimental drug could become the first to slow the progression of the devastating genetic illness.
The results have been hailed as “enormously significant” because it is the first time any drug has been shown to suppress the effects of the Huntington’s mutation that causes irreversible damage to the brain. Current treatments only help with symptoms, rather than slowing the disease’s progression.

BBC News: "Huntington’s breakthrough may stop disease"
The defect that causes the neurodegenerative disease Huntington's has been corrected in patients for the first time, the BBC has learned.

An experimental drug, injected into spinal fluid, safely lowered levels of toxic proteins in the brain. 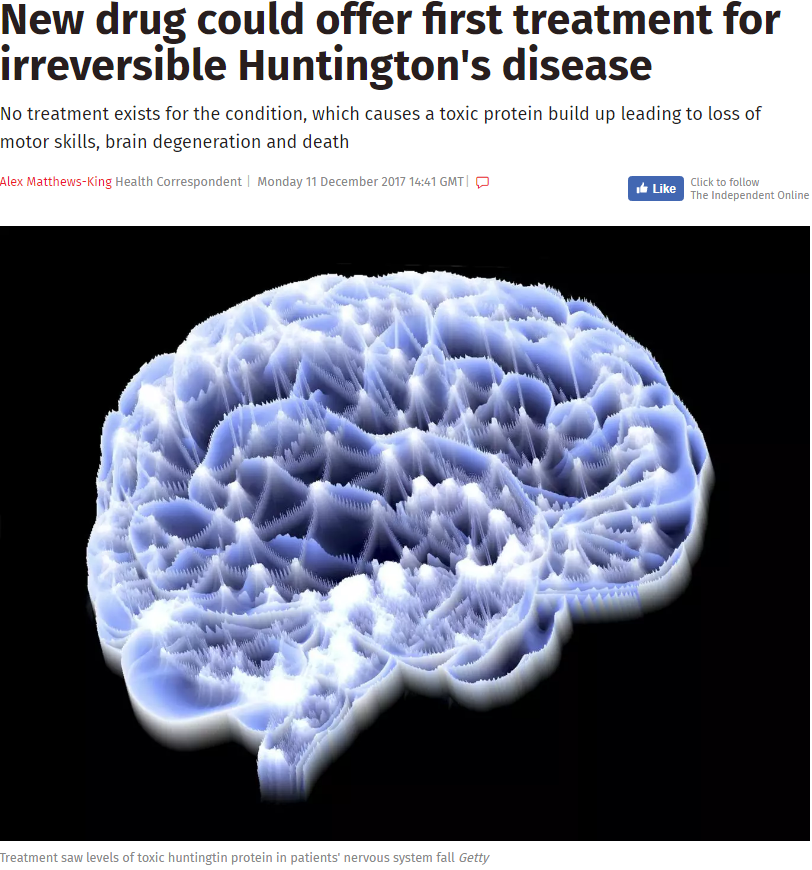 The Independent: "New drug could offer first treatment for irreversible Huntington's disease"
The unstoppable progression of the inherited disease Huntington’s could be slowed or even halted by an experimental new treatment which has proved “enormously successful” in early patient trials.

The Brain Bank: "The science behind the stories: drug treatment to slow progress of Huntington’s disease."
Huntington’s is a devastating genetic disease, described by patients as being like “Parkinson’s, Alzheimer’s and motor neurone disease rolled into one”. In most cases the disorder can be traced back to an inherited genetic mutation which increases the length of the Huntingtin gene. The mutated gene harbours an abnormally long sequence of the DNA base pairs C A and G (this type of mutation is known as a CAG expansion).